Being The Only One

At the core of my identity, I am a woman, a person of color, a mom, a Christian, an entrepreneur, a daughter, a sister, and a friend. Sometimes these identities particularly that of being a woman, a person of color, and a mom, worked to my advantage, and other times they were a disadvantage. Oftentimes, I’ve found myself being the “only one,” and it had an impact on my career in many ways, both positively and negatively. In this excerpt, I’ll share how it worked to my advantage.

For anyone who is a part of a non-dominant or minority group, you know exactly what being the only one means. For those who don’t, it means being the only 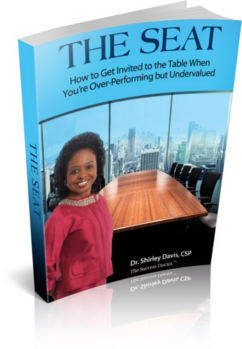 one who looks like you in a group, on a project, or in a meeting. It means that you stick out like a sore thumb and may not feel included or even welcomed by the dominant group. You may feel quite awkward like all eyes are on you with quiet whispers of, “why is she here?” I’ve been in Human Resources most of my career, and being a woman worked to my advantage because it’s a female-dominated field—67% of the HR field are women so I fit right in. As a matter of fact, it allowed me to have a voice, to be heard, and to be a “go-to” resource because the nature of Human Resources deals with answering employee questions, responding to problems, creating policies and programs, training and developing others, resolving conflicts, and managing performance. When I entered into this profession over 30 years ago, it was expected that you be caring, nurturing, a good listener, a mediator, and set policies for how people were treated.

Before entering into HR, I worked in banking as a Teller Supervisor, Associate Branch Manager, and Customer Service Rep. I was very good at my job. So good that I consistently exceeded expectations and sales goals, and was asked to develop and facilitate a training program for new CSRs. I did this for nearly a year and absolutely loved it. And when a position opened up in Human Resources to lead Training and Development, I jumped on it.

This was my first HR job but it would ultimately become my career path and open new doors of opportunity. After a year of being the Director of Training, bank officials approached me about taking on a broader role leading “cultural diversity training.” I was the only minority in the bank working in that role at the time. But as I’ve come to learn, many of my other colleagues who are also in the field of diversity and inclusion were either ‘volun-told’ (they didn’t volunteer) or selected because they too were ‘the only one.’ I can attest that none of us grew up saying, “one day when I get older, I want to be a Chief Diversity Officer or a Human Resources professional.” This work found us. And once we took on the responsibility of the work, it became our “calling” and life work.

But no one likes to be chosen just because they are the minority in the group. You want to be chosen because you are the best person for the job in skills, qualifications, and performance. But the way that I turned it into a positive impact for me was that I was willing to take a risk. I was willing to learn. And, I figured, “I’ve been a minority all my life, I’ve been a woman all my life, so I can probably figure this out.” I certainly understood the struggles of women and minorities and I could relate to them in the community. And I figured that I could do the research, find some experts, and partner with some consultants to learn about the technical aspects of the role and the new laws that necessitated a greater focus on the minority community (The Community Reinvestment Act). And this began my new career path in the work of Human Resources and Diversity & Inclusion.

So being a woman and a person of color did work to my advantage then, because it actually became a career path for me. It really was a game changer because it was that job at the bank, and that role in training and cultural diversity, that allowed me to see a path where I really felt like I added value, that utilized my strengths, and that aligned with my personal values. It was work that made me feel like I was impacting other people’s lives.

The other positive impact is that it allowed me to be like an ambassador; to be a champion for those who were not given a fair shot even when they were over performing; to help others grow, develop, and be successful. I was helping to influence and change policies that would have a positive impact on our community as well as to our staff.

I recognized, having been on the front line, how some policies really can and do have a negative and disproportionate effect for certain groups. So I was able to be a champion and an advocate for women, people of color, as well as others who were the “only one” in the organization. And that’s been my path now for the last 30 years.

However, those 30 years were not paved with the best experiences. There were some real disappointments and challenges that I faced being a woman and a person of color. I was marginalized, pre-judged, misunderstood, labeled, and discriminated against. On the webinar (Dec. 13, at 2 pm EST), I will highlight a few of them and what lessons and strategies I implemented in order to take control of my own personal power.

Join me for a FREE webinar on December 13, 2016, 2-3 pm ET, where I’ll give you a sneak preview into my new book “The Seat: How to Get Invited to the
Table When You’re Over-Performing but Undervalued”.

I will share some of my expert advice on how to add value to your organization and strategically position yourself for whatever seat you seek.
Register today for the webinar by completing and submitting the registration via the link below. Purchase your copy of the book today here: https://new.drshirleydavis.com/store/